A decade of progress

Accident tolerant fuel technologies are designed to provide additional safety and response time in case of an incident at a nuclear power plant. What progress has been made after ten years? NEI reports 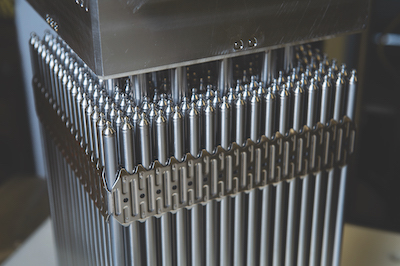 In response to the event at Fukushima in 2011, the global nuclear industry initiated and accelerated research programmes aimed at developing a new generation of fuel systems with improved safety characteristics. These technologies are integrated into the traditional fuel pellets and cladding for light water reactor fuel designs to provide an additional layer of protection.

In 2012, the US Congress directed the Department of Energy (DOE) to give priority to developing enhanced fuels and cladding through its so-called Accident Tolerant Fuels (ATF) Program.

More than a decade on there has been significant progress, especially on near-term solutions. Nuclear fuel vendors Framatome, Global Nuclear Fuels and Westinghouse are working with the DOE to develop new cladding and fuel designs that increase the performance and enhance the safety response to severe accidents.

Framatome’s first implementation of its ATF technologies was at Goesgen (1010MW PWR) in Switzerland in 2016, with the introduction of coated claddings and silicon carbide test samples. Later, in 2019, 20 full length coated rods were introduced at Goesgen and they have now undergone two complete cycles of irradiation. Also in 2019, Framatome introduced four lead test assemblies in the US at Southern Nuclear’s Vogtle 2 (1229MW PWR) that consisted of four full length chromium-coated rods filled with chromia-enhanced pellets. These were the first full length complete ATF rods to be inserted anywhere in the world. In 2020, Vogtle 2 completed the first cycle of operation with this design. The results were as expected, Framatome says, noting that the cladding performed well. The second cycle of operation was recently completed, and data collection and analysis are currently in process.

In 2020, lead test assemblies using GNF’s ARMOR and IronClad ATF solutions were installed at Exelon’s Clinton nuclear plant (1098MW BWR) located in Illinois. Earlier, LTAs were loaded into Hatch 1 in Georgia, operated by Southern Nuclear. Two variants of IronClad material were installed at Hatch 1 – one in a fuel rod form but without fuel, and the other in the form of a solid bar segment. ARMOR LTAs containing fuelled rods were also installed at Hatch 1.

Westinghouse’s nearer-term EnCore Fuel has chromium-coated zirconium cladding and ADOPTTM fuel pellets, offering moderate benefits in safety and economics. The ADOPT pellet is a mature design that has been used in boiling water reactors in Europe for more than a decade.

It improves uranium dioxide fuel by including small amounts of alumina and chromia. Westinghouse says these additives promote grain growth and sinterability of the uranium dioxide, tripling grain size and increasing density by up to 2%. The larger grain size delays fission product transport and provides better retention of fission gases. The higher density allows more uranium to be placed in fuel assemblies for a higher linear power (higher burnup), which improves fuel economics. The pellet is also expected to provide additional safety benefits in terms of fuel fragmentation, relocation, and disposal in an event such as a loss-of-coolant accident. In 2019 and 2020, EnCore test assemblies were loaded at the Byron 2 in Illinois and Doel 4 in Belgium.

Last summer, several lead test rods containing the EnCore fuel technology arrived at Oak Ridge National Laboratory (ORNL) for irradiation experiments on the fuel to support licensing efforts with the NRC. As part of the licence review process the regulator is also reviewing Westinghouse’s topical report on its ADOPT fuel pellet, which was accepted back in 2021.

In September 2021, Rosatom announced it had started pilot operation at Rostov 2 using a new generation of Russian ATF. Three TVS-2M fuel assemblies were loaded into the VVER-1000 reactor core. Each assembly with 312 fuel rods contained six fuel rods made using chromium as a structural material with Alloy 42 (an iron alloy containing 42% nickel), and six fuel rods with cladding of zirconium alloy with chromium coating.

In December, six fuel assemblies with uranium-plutonium REMIX fuel rods were loaded into the VVER-1000 core during the scheduled outage at Balakovo 1. Each REMIX fuel assembly of the standard TVS-2M model contains only fuel rods with a mixture of uranium and plutonium recovered from spent nuclear fuel (312 fuel rods in each bundle). REMIX is made from a mixture of reprocessed uranium and plutonium extracted from spent nuclear fuel. It has low plutonium content, and its neutron spectrum does not vary from common LEU fuel, which means that it may be introduced without any changes in reactor design or additional safety measures, according to Rosatom.

US utility Southern Nuclear has agreed to install four Westinghouse higher-enriched fuel LTAs into Vogtle 2 by 2023. They will include Westinghouse’s ADOPT pellets and advanced chromium-coated zirconium alloy cladding design. It will also leverage four lead test rods enriched up to 6wt% with uranium-235 — 1% higher than is currently licensed. The higher enrichment will allow for higher fuel burnup and longer operational cycles between refueling.

“Southern Nuclear and Westinghouse have been tremendous partners to our Accident Tolerant Fuel Program,” says Frank Goldner, a nuclear engineer within DOE’s Office of Nuclear Energy. “Testing this higher-enriched fuel is a major step in deploying new fuel technologies that can help improve the economics of our existing fleet of reactors.”

GNF says it has been working to expand the licence for its fuel manufacturing operation in Wilmington, North Carolina, to handle higher enriched fuel. “Along with our utility partners, we are working towards loading higher enrichment fuel assemblies, up to 8wt% U-235, at a future date.”

Framatome, which operates a fuel manufacturing facility in Richland, Washington, has also announced its plan
for delivering higher enriched, higher-burnup fuel to the industry by 2026 as part of its Advanced Fuel Management programme. Framatome is currently working with enrichers, plant operators and the NRC to bring these technologies to market and says it is close to delivering fuel above 6wt%.

Framatome recently received approval from the NRC to transport fuel assemblies with U-235 enrichments up to 8wt% and last year the NRC accepted the review of a topical report to apply its Advanced Codes and Methods to operating conditions above 5wt%.

In parallel with these near-term efforts, vendors continue to develop and test longer-term solutions such as silicon carbide fuel channels and cladding, uranium nitride pellets and metallic fuel. Several SiC composite cladding materials are being developed by Framatome and Westinghouse, according to NRC. Russia, too, is developing more long-term solutions. The AA Bochvar Research Institute of Inorganic Materials (VNIINM), a subsidiary of Russian nuclear fuel manufacturer TVEL, announced this year it had developed the technology and manufactured experimental fuel pellets from uranium disilicide for light water reactors.

The quest to develop accident tolerant fuels — both in the long- and short-term — is likely to continue to grow in importance for both political and economic reasons. Outside of the US, for example, the proposed EU Complementary Climate Delegated Act, expected to apply from 2023. It states that from 2025, existing and new build projects must use ATF. Industry must monitor such developments, invest, and innovate to meet these targets.