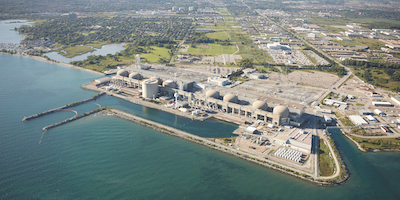 PICKERING NUCLEAR GENERATING STATION IS an integral part of the community of the same name.

The city, home to about 100,000 people, and neighbouring communities has benefited from a long- standing relationship with the station. The plant employs about 2500 workers, many in high-skill jobs. But OPG has also been a visible corporate champion with years of community tree plantings that have contributed thousands of saplings to the city, educational activities, community fundraisers, and economic investments.

OPG’s role within the community has been equalled by the station’s influence on the fortunes of the province it serves. Ontario is Canada’s most populous province and home to the country’s economic engine, the Greater Toronto Area. Nuclear provides 60% of Ontario’s electricity, making it home to both clean air and a strong nuclear supply chain — a decided economic strength in a world looking for more low-carbon energy.

Pickering nuclear can be credited with much of this. The original flagship of the Ontario Power Generation fleet was the first commercially operated station to use Canada’s CANDU technology. The success of the eight-unit, 3100MW station, built in the 1970s and 1980s, paved the way for a CANDU industry that today spans two Canadian provinces and seven countries.

Pickering has not relinquished its status as an innovator over the decades. For example, about five years ago, management gave the green light on an idea called X-Lab. It integrated artificial intelligence, advanced manufacturing and the Internet of Things into the plant to improve efficiencies and strengthen performance. The initiative spread company-wide, creating a new generation of innovation culture at OPG.

As the station moves toward the end of operations, the team asked themselves how to use the plant closure as an opportunity for Pickering to lead in the next phase of life cycle management — decommissioning.

“Pickering is a significant decommissioning project: eight reactors, a large site and first-of-a-kind technology,” says vice president of decommissioning strategy, Carla Carmichael. That, she says, “creates an opportunity to change the plant closure from a potential liability to an asset.”

As Carmichael and her colleagues began to think their way through the stages of the plant’s end of life, they turned from the process activities to the value proposition.

In Canada, as globally, there will be unprecedented investment in clean energy systems to achieve net-zero emissions by 2050. Low-carbon and abundant nuclear energy has an important role to play in achieving that, but only if public and government confidence remains high and in some jurisdictions is strengthened. If Pickering can demonstrate sustainable life cycle management, it could provide an important contribution to a social licence for new nuclear as the province, and other jurisdictions across Canada, plan their low-carbon energy systems.

By exploring the intersection of new technologies and approaches in decommissioning, OPG can identify areas for greater efficiencies that lead to better outcomes on cost, environment and social value. This could also be a win for the local community, attracting the type of tech industry companies the city wants for its own growth plan.

To achieve these goals, OPG created a centre for the study and execution of decommissioning technologies that brings supply chain, indigenous, community and academic partners together to build solutions for sustainable end-of- life strategies that support technical and socio-economic goals. Rather than focusing on decommissioning activities, the team has focused on the outcomes, and from that the Centre for Canadian Nuclear Sustainability was born.

“We knew we were going to have to do a lot of stakeholdering, drive innovation and address the perception of decommissioning and waste as an Achille’s heel,” says Carmichael. “By communicating what really is going on, which is a very good story, telling that story and driving improvements, we felt that would be an enabler to the sustainability of nuclear,” she says. “With SMRs being part of that clean energy strategy, we wanted to demonstrate that we have dealt with the life cycle issues and that nuclear really is that sustainable energy source for future generations.”

The centre has four pillars. The first Carmichael highlights is community. “This is just so important,” she says. “It’s not just the (local) government. It’s the people, the kids in school. We need to do many things under that pillar. We need to work with First Nations and that’s critical for us: to work with them for what can be.”

Carmichael recognises there will be diverse views on the path forward. This is why, with a few years of operation left, OPG has created “listening” sessions to hear a wide spectrum of views on the project. There are two advisory councils, one representing a wide range of host community stakeholders and the other specifically for indigenous voices. “You need to open up the conversation to find the way out,” says Carmichael.

Decommissioning is an evolving field with many opportunities to leverage new technologies, including advanced manufacturing, artificial intelligence and other tooling and inspection strategies tailored to the specifics of decommissioning work. As Carmichael notes, the work involved to fully decommission a plant that sits in the middle of an urban centre the size of Pickering is complex. Gaining efficiencies and environmental benefits will require ingenuity and the thoughtful approach that the engineers, scientists and leaders who developed the technology and built the plant a half century ago, applied to that challenge.

OPG knows it cannot do it on its own; this was a lesson from the successful Darlington refurbishment project. It led to a decision to create the Centre for Canadian Nuclear Sustainability (CCNS) as a collaboration centre.

“There are a couple of unique things for Pickering that creates unusual challenges. We want everybody to help us to meet these challenges and help prove nuclear can be successful,” says Carmichael.

The work of the CCNS will also fall into three other pillars: innovation, environment and economy. Areas of focus already identified are:

The plant is an ideal showcase. Its proximity to transportation corridors and to Canada’s economic centre allows for international industry, academia and government to easily visit the site as the work progresses.

Carmichael and her team are plugged into international organisations to ensure they have the latest knowledge. As it formulates its plans, it is critical OPG and its supply chain can deliver on what they have set in motion. This credibility is what gives nuclear a reputation as a relevant clean energy contributor.

“If you can have strong plans, supported by strong evidence, supported by the stakeholders and the community because you have communicated it properly and have demonstrated what you’re doing — maybe not the exact thing everybody wants, but holistically what is acceptable — you have a sustainable plan,” says Carmichael. “It is about keeping the sustainability of the plan, the activities and ultimately sustaining this clean energy opportunity.”