The annual Canadian Nuclear Association conference was held from 12-14 April. “Together for Net Zero,” landed on the heels of a federal commitment to radical decarbonisation and a budget that recognised the need for nuclear integration deeper within Canada’s energy strategy. It’s opening the door to a national nuclear opportunity, NEI contributor, Jacquie Hoornweg reports 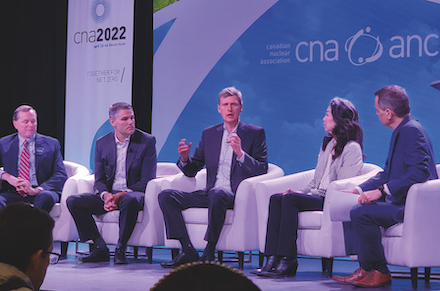 Above: The Innovation panel explored the growth opportunities for Canada’s nuclear industry in the drive to net zero by 2050 (Photo credit: Jacquie Hoornweg)

On 31 March, 2022, Canada's Net-Zero Emissions Accountability Act was published and with it, a federal commitment to net-zero greenhouse gas emissions by 2050. The Act includes aggressive 2030 milestone targets that call for emissions reductions of 40-45% from 2005 levels.

The following week, the government answered their own call to action, in part, with a budget that included the most bullish language on nuclear energy in more than a generation. Key nuclear planks included funding for small modular reactor (SMR) deployment and evolution of the country’s regulatory framework to support it.

A few days later, as the industry gathered at the 2022 Canadian Nuclear Association Conference, in-person for the first time in more than two years, there was palpable excitement. The industry feels itself sitting on the cusp of unprecedented growth, tempered only by the speed, scale, and fortitude required to land this expansion opportunity.

There are technical challenges to be sure, and added to that, the daunting statistics concerning the required workforce during a time of high demand for talent. Certainly, young engineers in attendance had full dance cards. Larger still is the challenge to build literacy and earn trust with the public and stakeholders in greenfield communities and more generally, across the country.

Then there are the new levels of collaboration required with cross-sector partners to secure new horizons of nuclear integrated with renewables, hydrogen, and as a clean energy source to power remote communities, decarbonise mining, oil, gas, agriculture, and emissions-heavy industry. The scale and speed of change would be head-spinning at any time; as the world carefully emerges from its COVID cocoon it is even more so.

Hence the conference theme, “Together for Net Zero,” which was reflected in panels, speakers, and the composition of participants. In attendance was a wide-ranging mix of nuclear industry, digital technology vendors, municipal government, indigenous community leaders, public policy makers, and universities, in addition to the traditional utility and supply chain more commonly found at sector conferences.

Increasingly, there is political agreement that to achieve decarbonisation ambitions, it will be exceedingly difficult without nuclear in the mix, not only for traditional electricity uses but integrated into electrification and feedstock for clean fuels to decarbonise civil infrastructure like transportation, built spaces and heavy industry. Nuclear’s role will be pivotal if net zero is to be achieved without drastic structural changes to economies and lifestyle.

For Canada, there is plenty to celebrate in this. Nuclear is already the primary source of electricity for almost 40% of Canadians and where it is used, there is general support for it. But that statistic is not as visible as the number suggests. Nuclear electricity generation is centred in just two provinces of Canada’s vast geography: the country’s most populous province, Ontario (with 13.6 million of Canada’s 37.8 million people and the country’s business epicentre), and in the smaller New Brunswick.

Ontario has one of the cleanest airsheds and lowest-carbon electricity grids, globally, thanks to its mix of nuclear (about 60%), hydro, renewables and some gas. From an economic standpoint, and as a foundation for growth, both provinces have the advantage of a fully integrated nuclear supply chain. These supply chains are currently well-employed and building expertise and bench strength through participation in multi-billion-dollar refurbishment projects at the multi-unit Darlington and Bruce Power nuclear stations. They’re also integrating advanced manufacturing and digital technologies, reaping vast efficiency gains in operations and reduced project costs. And they’re embedded deeply in the research, development and regulatory work in the scale-up for SMR deployment.

Supporting the R&D are research labs and a network of universities, including one (Ontario Tech University) where one of North America’s only dedicated nuclear engineering undergrad programmes is co-located with Canada’s first IAEA Collaborating Centre, an SMR research centre and the Brilliant Energy Institute. Canada also has three universities with research reactors: McMaster University, Royal Military College and L’E´cole Polytechnique. McMaster has a nuclear pedigree that goes back more than 70 years.

There’s lots to build on but the greatest opportunity to take nuclear national currently lies in SMR deployment. It is supported by a federal Action Plan, a four-province (Ontario, New Brunswick, Alberta and Saskatchewan) commitment to deploy SMRs as part of their net-zero strategy, as well as growing industry collaboration across the four provinces.

With some of Canada’s reactors having recently reached or about to reach the end of their operating life, another emerging area of activity is in decommissioning, including the first-of-a-kind CANDU decommissioning at Pickering Nuclear post-2025. This new phase of life-cycle work has drawn international expertise as Canada leans into established best practices. At the same time, a need for novel decommissioning techniques to address the unique factors within Canada’s CANDU technology is stimulating investment in research and innovation that can be exported.

Similarly, Canada’s waste management programme development has hit a new level of maturity, following more than a decade and a half of intense research, international collaboration and benchmarking, as well as deep community and Indigenous engagement.

Yet, for all this forward motion, the conference was not overly self-congratulatory. Rather, with lessons of the past firmly in mind, conference keynote speakers, panelists – as well as in the chatter of side meetings and receptions – an urgent work list was repeated as the table stakes for Canada to parlay its regional nuclear strength into a national and international clean energy strategy that could see it become a key global partner for other countries.

The list includes technology, regulation and workforce advancement to be sure, but foremost, it is about the industry’s relationship with the public including:

In summary, by building on its pre-existing nuclear strength Canada has all the ingredients to be successful in its net-zero goals. It will require deep integration across jurisdictional boundaries; across energy technologies; and amongst diverse collaborators. But most of all, nuclear needs to win the hearts and minds of the millions of Canadians not yet familiar with nuclear as a low-carbon superpower, including its safeguards, and its economic value. That communication effort must be backed by performance that is unfailing at this pivotal moment in every part of the sector, at every interaction, and over the next steps too. As they said, “together for net zero.”

A lively tradeshow floor reveals the buzz around Canada’s nuclear sector as the industry looks to build on its strengths to reach new heights as a global nuclear leader (Photo credit: CNA)
Engaging with indigenous communities is key to reaching the goals of Canada’s net zero ambitions (Photo credit: CNA)
Post to: