Flash sintering: a novel technique for use across the nuclear life cycle

Flash sintering is a promising technology for producing nuclear fuel, but could also support the immobilisation of nuclear material to produce waste forms for disposal, as Samira Bostanchi, Nicholas Barron and David Pearmain explain 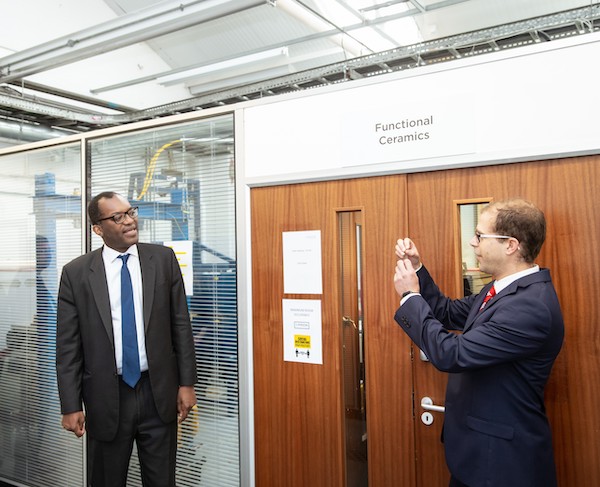 Manufacturing ceramic-based nuclear fuels and waste forms has often been an intensive process in both time and energy. Recent advances in manufacturing offer the potential to disrupt these established processes, providing economic and throughput advantages. Initial work suggests flash sintering can achieve this, by application and optimisation on surrogate (nuclear) materials. Advanced manufacturing techniques may produce a wide range of microstructures for re-use or disposal applications, depending on the requirements, but further development is still required to demonstrate and overcome challenges.

Flash sintering (FS) is a field-assisted sintering technique, which uses direct application of an electric field to a pellet to shorten production timescales. Rapid heating takes place due to the direct dissipation of heat in the ceramic body, enabling lower furnace temperatures than in conventional sintering. In that way it promises tremendous energy reduction and enhanced throughput, and it has driven research on a wide range of materials with both economic and environmental motivations.

FS was first reported in 2010 for yttria stabilised zirconia and it has since been applied to other ceramics. Recent work has extended this to nuclear fuels, mainly focusing on uranium dioxide or cerium dioxide, the latter as a surrogate.

FS has been shown to be effective in producing high-density uranium dioxide pellets, as a potential advanced manufacturing route to a common nuclear fuel. The remarkably fast rates of densification in uranium dioxide, and at lower firing temperatures than achievable by conventional sintering, has made it a promising candidate to study the densification of other nuclear ceramics. One such ceramic is mixed uranium-plutonium oxide (Mox) fuel. Recently published work has successfully applied FS to produce on oxide doped cerium oxide at significantly lower temperature and time. Due to the high neutron cross section of gadolinium it is often added to nuclear fuels to act as a burnable (neutron) absorber but it is also being investigated as a neutron poison for ceramic waste forms destined for disposal.

The reprocessing of spent nuclear fuel will end on the Sellafield site shortly and its focus will shift exclusively to decommissioning of the existing nuclear facilities.

A key component of the overall mission is managing legacy nuclear materials. The UK holds the world’s largest separated civil plutonium inventory. Safely managing this inventory to a secure end point is a UK government priority, to avoid burdening future generations with security risks and proliferation sensitivities. The government aims to identify a solution that puts the UK’s civil plutonium beyond reach and to deliver nuclear cleanup/decommissioning.

A recent analysis has highlighted the necessity to adopt a dual track approach to plutonium management because of the uncertainty in the capital and operational costs of Mox fuel manufacturing and plutonium immobilisation facilities, and the associated technical risks. There is a commitment that any plutonium which is not converted into Mox, or otherwise reused will be immobilised and treated as waste for disposal.

A typical nuclear fuel production route involves mechanical milling and blending the uranium or uranium-plutonium dioxide powder feeds, followed by cold pressing into pellets and pressure-less sintering at high temperature in a reductive atmosphere. Production of ceramic waste forms, to immobilise any remaining plutonium, could occur via a similar method. However, it is important to be aware of new developments in process technology that might improve process safety, environmental performance or economic effectiveness.

FS is a promising technology for the production of Mox fuel, but it could also support the immobilisation of nuclear material to produce waste forms for disposal. If applicable to industrial fuel or waste form production, this could translate to huge productivity gains and reductions in energy consumption. It may also support retention of volatile but long-lived radioisotopes, in particular minor actinides such as americium oxide, which would normally vaporise out of the ceramic during the high temperatures and long hold times required with conventional sintering. Such incorporation of volatile species will be necessary not only to reduce the volume of waste but also to enable the implementation of sustainable fuel cycles through transmutation.

Alongside this, depending on the microstructural requirements, FS may enable the user to achieve target microstructures through appropriate setting of the flash parameters. If this is the case, additional mixing or milling, beyond homogenisation of the powder feeds, may no longer be necessary. With less manual handling of powder, there would be less dust and tool contamination and lower operator radiation doses.

As part of the Advanced Fuel Cycle Programme (AFCP) Fast Reactor Fuels project, Lucideon has demonstrated that FS is a reliable technique for manufacturing high density and homogenous ceria pellets (as a surrogate nuclear material) at lower timescales and furnace temperatures than conventional sintering methods. The £46 million AFCP was funded by the Department for Business, Energy and Industrial Strategy’s £505m Energy Innovation Programme.

To provide optimal reproducible control over the sintering process, a high-speed non-linear controller was used. This controller has been developed by Lucideon in order to address the challenges of various FS projects. It controls the rate of change and timing of the electric field parameters during flash, thereby avoiding the sharp changes in power dissipation of traditional constant current-limit experiments, and which can lead to localised sintering. Optimisation of the flash parameters, together with electrode and interface development, facilitated the FS of crack free, homogenous pellets.

FS can produce a wide range of microstructures, but further development is still required to overcome process challenges. The successful application of FS on ceria pellet has formed a solid baseline and Lucideon, in collaboration with the UK National Nuclear Laboratory and University of Manchester, will further demonstrate the process on uranic materials. This work is supported by further R&D studies to develop process operations, and evaluate the applicability of FS as a novel technique to manufacture both fuel and waste forms.

David Pearmain is head of field enhanced sintering at Lucideon

Photo: Kwasi Kwarteng, Secretary of State at the Department of Business, Energy and Industrial Strategy, talks to Dr David Pearmain at Lucideon in July (Source: Lucideon)

Image of a pellet inside the FS apparatus during processing (Source: Lucideon)

Kwasi Kwarteng, Secretary of State at the Department of Business, Energy and Industrial Strategy, talks to Dr David Pearmain at Lucideon in July (Photo: Lucideon)
Post to: