From strategy to reality at Dounreay

The Dounreay site poses some longstanding high-security waste problems. Hazardous radioactive acids awaiting cementation are top of the to-do list, but the long wait has had positive aspects. By Corrina Thomson 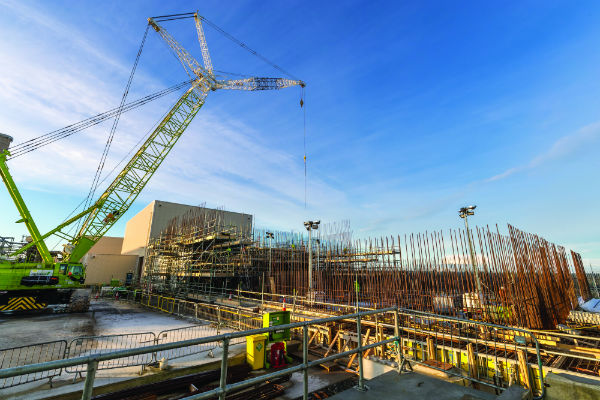 PROFESSIONALS FAMILIAR WITH NUCLEAR, PARTICULARLY experimental or reprocessing sites, will know these complex old sites have a variety of challenges as wastes are created by decommissioning and legacy wastes are treated for storage or disposal. Storage facilities deteriorate over time, making progress on waste immobilisation more important.

The operational and decommissioning waste streams in the UK nuclear waste inventory show just how complex the task of dealing with legacy wastes is. It is possible to deal with these wastes, but only with the correct funding, impetus and management. The question of whether to treat a waste on site or to transport it elsewhere can often be as much of a political or management decision as a technical or regulatory one.

Dounreay, in northern Scotland, is one such decommissioning site with a variety of lower and higher activity solid and liquid waste streams. Dounreay was the UK’s flagship fast reactor development site and was the location for a materials test reactor (MTR), the experimental Dounreay Fast Reactor (DFR), and the larger-scale Prototype Fast Reactor (PFR).

In use from the 1950s onwards, the site was also used for reprocessing, fuel fabrication and experiments on materials and reactor systems. During its long history, it has been both at the cutting edge of nuclear technology and derided for bad waste management practices.

There have been successes in waste management in recent times. They include dealing with volatile liquid metal coolant, isolating the site’s underground waste shaft from the environment and dismantling many old plants. Currently work is under way to extract failed fuel elements from the DFR.

Dounreay’s fuel cycle area (FCA) is a segregated part of the site. It comprised facilities, some very old, where materials were examined, fuel was fabricated, irradiated material was dissolved, and special rigs were created to learn about materials and reactions. It includes one of the most hazardous facilities at the site, the high-active liquor (HAL) store.

The HAL store was designed to receive, condition and store medium- and high-active raffinates (liquids separated during reprocessing) before being treated and cemented at the nearby cementation plant. It contains MTR raffinates, DFR raffinates, contaminated solvents and oils, and ammonium diuranate (ADU) floc. The floc results from decontamination of high-alpha medium-active and low-active liquors from the PFR fuel reprocessing plant.

The last of the MTR raffinates were cemented in drums in 2013. Between 1958 and 1966 13,000 MTR fuel elements were reprocessed at Dounreay, including fuel from other reactors in the UK and abroad. The raffinates were remotely transferred from underground tanks to the Dounreay Cementation Plant (DCP), where they were mixed with cement powder inside the 500-litre drums in a remote handling facility. The end result is nearly 5000 drums of solid waste.

The last of the DFR raffinates were immobilised in 2016. In total 232 cubic metres of raffinates was put through the DCP and grouted in 875 drums for long-term storage.

The main hazard at the HAL store is now four tanks of PFR raffinate. This is a nitric acid solution containing 96.6% nitric acid, 3.4% metals in solution (copper, sodium, iron, cadmium, nickel and zinc), fission products and trace quantities of uranium and plutonium. Over 200 cubic metres of this waste was produced by reprocessing PFR fuel.

The long period that the waste has been stored means it has cooled down. It is now classified as intermediate level waste (ILW). Former site operator, the UK Atomic Energy Authority (UKAEA), justified the reclassification of PFR raffinates on the basis that radioactive decay resulted in heat generation falling to an extent that artificial cooling was no longer required during storage. It said the heat output was considerably below the internationally accepted threshold for HLW.

Both cementation and vitrification were considered as options to immobilise the PFR waste. Its composition meant cemetation was appropriate and the existing cementation plant underwent engineering modifications so workers could start to immobilise PFR raffinates.

In March 2018, initial commissioning of the process started with a quantity of PFR raffinates being immobilised as 15 cubic metres of solid waste.

At the time, project manager Stuart Andrew said: “One of the reasons that this material is so hazardous is because it is in a mobile, liquid form. We are taking an exact amount of liquid waste from each tank to create a consistent blend. It is then mixed with cement, pulverised fuel ash and lime powders to create a stable, solid waste package.”

Waste director Sam Usher added: “This is probably our highest single remaining hazard at Dounreay. Safely and compliantly creating the first solid waste drums is a huge achievement for the team and a major step forward as we deal with the site’s legacy hazards.”

Up to 100 drums were cemented in phase one of the PFR raffinates programme, which is now complete. Phase two of the programme is currently on hold pending the construction of a new waste store, under construction. The purpose of long-term stores at Dounreay is to hold waste in accordance with Scottish government policy of waste storage near-site and near-surface. Geological disposal is not government policy in Scotland, unlike the rest of the UK.

Graham Construction was awarded the contract to construct the store, which is due to be complete by the end of 2021. The concrete floor slab of the store has been completed.

Mark Raffle, lead programme manager from the Nuclear Decommissioning Authority, said: “Immobilisation of this highly radioactive liquid will be a significant step towards reducing the remaining hazards at Dounreay. Completion of this work will enable decommissioning of the major facility where the material is currently stored, moving the site closer towards its interim end state.”

Four countries have radioactive waste from reprocessing of overseas research reactor fuel at Dounreay that is due to be returned: Australia, Belgium, Germany and Italy.

The NDA asked the UK government whether it could use radioactive waste substitution arrangements for the return of waste. Instead of sending industry customers the radioactive waste allocated to them under their reprocessing contracts, a radiologically equivalent amount of radioactive waste source would be sent. This helps with site waste strategy.

Government made it clear that its policy has not changed — radioactive wastes resulting from reprocessing of overseas spent fuel at Dounreay, under reprocessing contracts signed since 1976, should be returned to the country of origin. This is meant to be carried out as soon as practicable after the radioactive waste has been produced.

However, the government noted that circumstances at Dounreay had changed a great deal since the UKAEA entered into the contracts. Alternative means of satisfying contractual obligations could be considered to allow these obligations to be discharged as soon as reasonably practicable. After consultation, it concluded that substitution of PFR and cemented MTR raffinates from Dounreay with a radiologically equivalent amount of vitrified radioactive waste from Sellafield was permitted, subject to agreement with overseas customers and regulatory approval. It also concluded that substitution of PFR raffinates with a radiologically equivalent amount of cemented MTR raffinate was also permitted, subject to agreement and approval.