As a realistic alternative to magnetic bottle designs, commercial laser-based fusion is closer to reality than ever before using high-powered pulsed laser technology 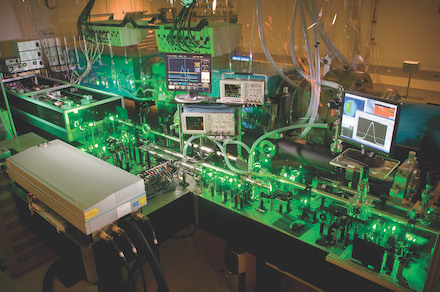 For more than half a century, scientists have been trying to recreate controlled solar energy on Earth. Theoretically, understanding fusion has long since ceased to pose any difficulties. However, the extreme conditions under which natural nuclear fusion takes place have so far prevented its practical application. At about 15 million degrees Celsius, thermal energy causes hydrogen atoms to collide so strongly that they fuse. It is possible to break through the electrical repulsion of two positively charged hydrogen nuclei using a technically controllable process but only at a very high temperature. At this temperature the matter enters the fourth state – plasma.

Different methods can be considered for creating appropriate fusion conditions in pressure and temperature. For many years, strong magnetic fields have been explored to hold plasma, but now, pulsed laser light is considered a promising ignition mechanism. It’s based on experimentally measured, scientifically confirmed conditions.

In addition, research successes in recent years have brought ground-breaking progress to the development of strong magnets and high-power lasers. In this environment, a veritable ecosystem of companies from adjacent technology fields is currently emerging. These companies are collaborating with various materials, research companies, and diode manufacturers to advance their roadmap for commercially viable fusion. It is perhaps possible to see the first fully operational demonstration plant by the 2030s.

Deuterium and tritium serve as fuel for hydrogen fusion. In a typical laser-driven fusion experiment, the two isotopes are housed in a pellet or target about 2mm in diameter with a special coating. Then, in a specially constructed fusion chamber, laser light pulses strike the pellet and abruptly heat its shell. The shell vaporises explosively and causes a recoil that extremely accelerates the hydrogen isotopes in the pellet, compressing and heating the fuel. In this heated and compressed fusion fuel, the isotopes collide and fuse, releasing so-called inertial fusion energy (IFE).

How can electricity be generated from this process? Every fusion reaction leaves behind not only a helium nucleus, but also a free neutron that crashes against the reactor wall at high speed. There, the braking energy generates heat, which can be converted directly into electricity.

A slight variation of the laser driven fusion approach works a bit more like a traditional combustion engine. A two-phase laser bombardment, or “fast ignition” for short, is the favoured approach for economic viability. First, a green laser flash compresses the capsule before a subsequent laser-generated proton beam heats the dense matter to ignition temperature. It works much more efficiently thanks to separate compression and ignition phases. This approach is favoured for commercial energy production because it relaxes the stringent requirements of the lasers needed to compress the fuel, and it offers a more viable approach to the high energy gains of greater than 100 needed for electricity production.

The Focused Energy approach builds on the tremendous progress made over the past decade, and introduces a few changes to increase the possibility for viable energy production. In addition to shifting from the compression- heating approach to fast ignition, Focused Energy will also use slightly different laser parameters and target configuration. To perform fast ignition, Focused Energy will not use perfectly spherical targets as previous experiments have employed, but will instead use capsules with a cone inserted from the side. In addition to providing the second target for ultrashort pulse lasers to produce the proton “spark plug,” this configuration allows for easier filling of the pellet with fusion fuel and makes a more robust target for injecting into the reactor. In addition, Focused Energy will compress the fusion fuel with green light instead of more traditional blue laser light used in previous experiments.

The benefit of using green laser light for pellet compression has to do, among other things, with an extended service life of the laser optics in this frequency range. In addition, the laser flashes can use the electricity from the socket more efficiently than in previous systems. These factors point to both operational and process advantages of the two-phase fast ignition solution.

Focused Energy is taking this fast-ignition approach to IFE through high-intensity lasers, using the research and experiments conducted over the past 30 years. It is inherently safe, efficient, and economically feasible and the energy produced will be “CO2 friendly”.

In terms of next steps, it will be crucial to refine production of the fusion target pellets and capsule robotic placement within the fusion chamber. There, the high-precision placement of new pellets must be able to occur every 3 minutes. By comparison, existing laser fusion facilities flash on average only every two hours.

The current conversion of laser energy to fusion energy is about 0.7, which was demonstrated by Lawrence Livermore National Laboratory’s National Ignition Facility (NIF) in August 2021. The experiment proved it’s possible to “ignite” a laser fusion pellet.

The goal is an energy yield efficiency of around 150. This is the factor by which the fusion energy obtained should exceed the laser energy irradiating the target. The target robot required for the demonstration system has been fully developed and is already in experimental use.

Another wrinkle to iron out concerns the optimisation of pellet coating. Here, the aim is to achieve the lowest possible cost of materials and simplified production processes, while at the same time improving evaporation properties in the second ignition phase of fusion. In commercial operation, a pellet must not be more expensive than 50 US cents. In addition, sufficient production capacity is needed. After all, with 24-hour reactor operation, the 10-hertz tempo in the fusion chamber requires no less than 860,000 pellets per day.

The future of energy is fusion

While there are still steps to be taken, inertial fusion energy through high-power lasers is now far closer than ever before to being viable under terrestrial conditions. The advances being made point to market viability much sooner than expected – within the next 10 years. Among others, exciting recent advances include:

Commercialising fusion will have significant implications for the energy sector, provide a reliable way forward to solving climate challenges, and be a remarkable achievement in science and technology.