As a growing number of reactors shut down and enter the decommissioning phase, Nuclear Engineering International held its second virtual conference exploring some of the technical developments, innovations and lessons learned from worldwide decontamination and decommissioning efforts. 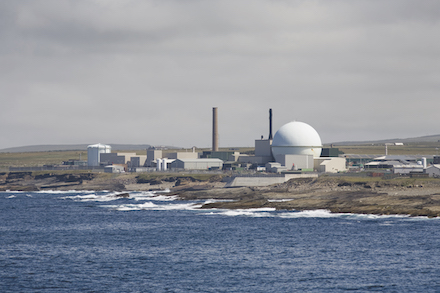 Above: Dounreay is a compact site but is one of the world’s more complex decommissioning challenges

AROUND A TENTH OF THE world’s operating nuclear fleet has been shut down since 2017, that’s more than 40 units. With more reactors set to follow this year alone, dozens are expected to end their operational life by 2030.

With this in mind, Nuclear Engineering International held its second virtual event dedicated to decommissioning. Sharing some of the technical developments, innovations and lessons learned from decommissioning and radioactive waste management projects around the globe, delegates heard from power plant operators, those responsible for clean-up of hazardous legacy sites and key industry players who outlined emerging technologies which can support the decommissioning and decontamination.

Jurij Sapoval, Head of Dismantling Projects Programme SE Ignalina Nuclear Power Plant, started off the event proceedings with a presentation on decommissioning Lithuania’s Ignalina. Early closure was required to facilitate EU accession due to safety concerns as the plant features two RBMK-1500 water-cooled, graphite-moderated channel-type reactors. The reactors were closed in 2004 and 2009.

Dismantling began in 2010 for unit 1 and in 2014 for unit 2 and decommissioning is scheduled for completion by the end of 2038 at a cost of some €3.4bn. To manage the large volume of waste, Ignalina is currently considering a facility to melt VLL/LL waste using two medium-frequency induction furnaces. A cost benefit analysis on this project is still required.

Delegates also heard from Gordon Tait, Senior Project Manager, Dounreay Site Restoration Ltd on decommissioning this large and complex site which dates back to the mid-1950s. Tait explained that the challenges of the site tend to be underestimated: “It is probably the most diverse nuclear site in the world in terms of breadth of capability. Other sites may be physically larger, but have a more focused product stream,” he said.

Decommissioning has been underway at the site for many decades, starting with the materials test reactor which was shut down in 1969. After fuel was removed in 1971 the reactor then lay until 1996. Inspection work inside the reactor supported the plan to defer the next phase of decommissioning for 20 years, by which time radiation would have decayed to an optimum point.

Turning to the prototype FAST reactor, Tait noted that techniques for the next phase of decommissioning are currently being determined, including removing components from the reactor vessel using cold cutting. The site is also exploring the use of plasma and laser cutting. “Laser cutting technology is rapidly reaching a level of maturity for active deployment in reactors and the airborne generation it causes is closer to 110th of that from plasma,” said Tait. Dounreay is also pursuing the potential of lasers to decontaminate heavily contaminated reprocessing plant vessels. The technique is starting to see early use in lightly contaminated metals, but the potential to deal with highly active liquor storage tanks is of interest where the only current option is chemical wash out, he said.

Decommissioning is also prompting some other exciting innovations and the conference delegates heard about a number of technical breakthroughs, among them a novel electrochemical decontamination technology for nuclear facilities.

Luke O’Brien, Laboratory Fellow at the National Nuclear Laboratory (NNL) outlined the approach which was developed for the decontamination of metal. Electrolytically-assisted surface decontamination is being actively explored for the decommissioning of nuclear facilities. One of the key goals for decommissioning is cost reduction and one area being targeted is the amount of intermediate level metallic waste, which exists in complex geometry and a variety of locations. However, relative to the actual thickness of the metal, the actual contamination layer is miniscule, in many cases only 10s of microns. Effectively removing this layer can release a lot of material from its current waste classification. This not only reduces the costs of the disposal of waste by orders of magnitude, but also can be done in situ, removing hotspots and reducing reliance on more expensive remotely commissioning approaches. The approach is based around using suitable electrolytes and the application of an electrical current to effectively oxidise the surface of the metal which dissolves into the electrolyte. The dissolved metal can then be precipitated out of solution and converted into a grouted waste form. “Every 1000 m2 of waste treated would only generate 1 m3 of effluent. In fact, we possibly generate less,” O’Brien said, concluding: “We believe that we can make substantial savings, both in terms of reducing the costs associated with decommissioning, but also the final waste volumes.”

Simon Delavalle, Chief Technical Officer, Veolia Nuclear Solutions UK, also gave a presentation on a robot arm developed for remote investigation of fuel debris in Japan’s Fukushima Daiichi unit 2. The Primary Containment Vessel Investigation (PCVI) system, which consists of a robotic arm with a 21m reach that can gain access to the PCV through a port with a diameter of just 550 mm. Designed to work in a high radiation environment of up to 1000 Gy/h full of obstructions and debris. The arm, which has 18 axes of motion, will investigate and characterise the PCV area, including the pedestal floor and fuel debris zone using a 3D laser scanner, gamma scanner and structured light sensor, as well as using the bespoke actuator capable of gripping, shear cutting and water jet cutting. Deployment of the arm is the first step in the Fuel Debris Retrieval campaign which is an International Research Institute for Nuclear Decommissioning (IRID) project supported by METI funds. Operations with the force feedback, long distance teleoperations manipulator are scheduled to start late in 2022 on behalf of MHI.

Following the success of this virtual event, NEI is hosting its third Small Modular Reactor conference this September. For more information see: https://pmi-live.com/events/small-and-advanced-reactors2022/