We are running out of time to choose between good and bad in the power industry. Soon people will have to make a choice based on other criteria – between either extending the life of previous technologies or a new technology platform. 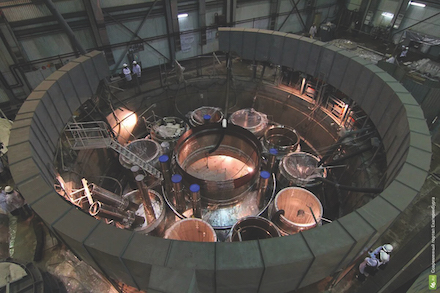 There is a growing understanding in the public consciousness that the consumption of hydrocarbon energy sources should be limited, as their combustion for energy production, including in transport, is one of the main contributers to environmental pollution (up to 75% of greenhouse gas emissions). Therefore, the transition to environmentally friendly energy sources in the coming decades is inevitable. In the past 20 years, power generation capacity has doubled and will probably triple by 2050. At the same time, reducing the scale of pollution is being discussed, but so far without noticeable results – and positive results are unlikely while up to 85% of the energy production is based on fossil fuels.

Rosatom State Corporation has adopted Strategy 2018, according to which fast neutron reactors based on a closed nuclear fuel cycle (NFC) will become the basis of energy security and environmental safety. Moreover, and the Russian Foreign Ministry has identified the main tools to combat climate change as nuclear power, which will replace the burning of hydrocarbons, along with forestry projects that will ensure an increase in carbon dioxide absorption by forests.

Addressing the Millennium Summit in 2000 at the UN, Russian President Vladimir Putin drew attention to the fact that the sustainable development of mankind can rely on the nuclear power based on a new technological platform in energy terms. Today, Russia and China have already made significant progress in this direction in research and development as well as their practical implementation.

Recently, one of the most pressing current problems – the provision of energy – has become a topic of serious discussion in the European media and on the Internet. Discussion have included gas prices, coal supplies, sanctions and the delay in commissioning the Nord Stream-2 gas pipeline, and the inability of solar and wind energy sources to meet the energy needs of Europe. As yet, nuclear power is not included, although it is mentioned as a carbon-free energy source. At the same time, it continues to be considered dangerous, while fast neutron reactors based on a closed NFC are seen as unacceptable from the point of view of the non-proliferation of nuclear weapons, with concerns about the production of plutonium, and the possible worldwide spread of these technologies.

However, the terms dangerous and unacceptable make sense only in comparison with some alternative. While it is possible to compare energy systems, it is also necessary to specify the comparison criteria – the cost of energy, fuel availability, environmental pollution, the impact on public health, the risk and consequences of accidents. It is important to consider the system as a whole, and not its separate elements. It is also necessary to consider what society will gain and what it will lose in choosing one or another energy source.

Only after such a comparison and consideration can any energy system be accepted or rejected. Currently, neither politicians nor society are looking to nuclear energy. However, solar and wind energy can no longer stand comparison even with conventional generation after they failed to provide Europe with energy last winter. Hydrocarbon energy systems lose in comparison with nuclear power with respect to environmental pollution and greenhouse gas emissions. In addition, they have a higher risks of accident with significant loss of life. Therefore, if we agree that nuclear power is dangerous, just like any other industry with a high energy density, then we will have to admit that hydrocarbon energy systems are even more dangerous. And if nuclear power systems are considered bad, then all others are even worse. Yes, nuclear power has specific dangers associated with its birth – the creation of nuclear weapons. However, this is more a political problem than a technical one.

In the final document of the Glasgow Climate Pact of the UN Climate Change Conference (COP26), held in Glasgow from 31 October to 12 November, 2021, there is no explicit mention of nuclear energy as a low-carbon energy source. However, the discussions held during the conference showed a growing interest on the part of the participating countries in the use of nuclear energy as a low-carbon source. Even so, the existing structure of nuclear power, based on thermal neutron reactors, even when scaled up, cannot solve the problems of long-term energy supply for mankind because of its inherent resource and technical limitations when operating in an open nuclear fuel cycle. First, the reserves of natural uranium, like the reserves of any other fossil primary energy source, are finite at reasonable prices. At the current rate of consumption, these reserves are estimated to last for 100-150 years. Another limitation is the accumulation of used nuclear fuel (UNF) and the need to decide on its ultimate management. Even the processing of UNF from thermal neutron reactors with the subsequent use of regenerated uranium and the resulting plutonium does not solve the problem, but only slightly postpones the exhaustion of fuel resources. The reason for this is that plutonium-based fuel – mixed uranium-plutonium oxide (Mox) fuel can be used in a thermal reactor only once, since a change in the isotopic composition of plutonium during irradiation leads to the accumulation of other isotopes of plutonium, which prevents its further use in thermal reactors. Therefore, used Mox has to be stored until fast reactors are available.

Gradual changes in global nuclear energy structure and its eventual transition to fast neutron reactors based on a closed fuel cycle is a good solution to these problems. Moreover, this transition could be possible initially based on a two-component nuclear energy phase comprising simultaneous use of thermal and fast neutron reactors operating in a combined closed fuel cycle. This phase would facilitate smooth transition to a different structure of nuclear energy, as well as assist in solving the problem of accumulated UNF, the complete disposal of high-level radioactive wastes using controlled storage period lasting hundreds rather than thousands of years, and resolve the problem of separated plutonium now held in storage.

Fast neutron reactors of Russian design, analogues of the BN-1200M currently under development and the BREST-OD-300 experimental demonstration reactor already under construction, have practically no restrictions on fuel resources due to the use of the main isotope of natural uranium, uranium-238. It should be noted that Russia has already accumulated about 1 million tonnes of depleted uranium hexafluoride, in other words, U-238 of near-nuclear purity, which can be used to produce fuel for fast reactors. It is estimated that this amount of U-238 is equivalent of ~8·1022 J of energy. In comparison, mankind annually produces ~6·1020 J of energy. This means Russia’s depleted uranium alone carries energy which is 100 times greater than this annual production level. Fast reactors are virtually omnivorous and can use plutonium from thermal neutron reactors multiple times, even without separating it from a mixture with uranium and other minor actinides. Fast reactors will also be able to transmute their own minor actinides as well as those isolated from VVER UNF. This will ensure a reduction in the radioactivity of radioactive waste, making it much easier to handle because of the absence of minor actinides. This reduces the radioactivity of wastes in less than 200 years to a level equivalent to natural uranium.

However, a large-scale transition to nuclear power based on fast reactors and a closed fuel cycle raises concerns about an increase in the risk of nuclear proliferation. The response to these concerns should be newly developed technical and institutional measures, closely linked to the verification procedures carried out by the International Atomic Energy Agency (IAEA) within the framework of the implementation of safeguards agreements with non-nuclear-weapon States.

As for technical solutions, we can use the example of the pilot demonstration power centre (ODEK) being built in Russia with a BREST-OD-300 lead-cooled fast reactor. This reactor does not structurally provide a blanket – a radial or axial plutonium breeding zone – and the reactor breeding coefficient is close to one, i.e. there is no excess plutonium production. The reactor also does not produce weapons-grade plutonium – it is impossible to make any serious explosive device from this plutonium and certainly not a nuclear weapon. During the processing of the used fuel, a product will be produced from which new fuel will be made. This product is characterised by incomplete purification from fission products, and will contain uranium,  plutonium, and minor actinides like americium and neptunium. The remaining material will comprise fission products – highly radioactive plutonium and minor actinides – which will make any unauthorised handling extremely difficult.

It should also be noted that, to achieve critical mass of the nuclear material, sufficient for a nuclear explosive device, it would be necessary to divert significant amounts of the intermediate product generated in reprocessing – at least, 1.5 tonnes in the case of used fuel, 350 kg for the cathode deposit in the pyro-chemical extraction of the mixture, or 135 kg for uranium, plutonium, and neptunium nitrates. The diversion of such amounts would certainly be detected by the IAEA during their inspections under safeguards implementation. Protracted diversions of smaller amounts to accumulate the required material would have to take place over a long period of time and so increase the likelihood of detection.

Organisational solutions that address concerns about proliferation could be the establishment in nuclear weapons States of centres to produce mixed uranium-plutonium fuel and to reprocess used fuel, which could supply fuel for fast reactors located in countries that do not possess nuclear weapons. It would also be possible to create in countries requiring energy, centres such as Russia’s ODEK, which has on-site closed NFC facilities with intrinsic characteristics that prevent any diversion of plutonium for the production of nuclear weapons or nuclear explosive devices.

Moreover, widely used fast neutron reactors will facilitate in gradual emptying the plutonium storage facilities and reprocessing of all UNF coming from NPPs that are in operation now. In the absence of any need for uranium enrichment, this will significantly strengthen any nuclear non-proliferation regime.

Thus, when switching to nuclear power, society will receive an environmentally friendly, practically inexhaustible source of energy for thousands of years and hope for further development. With large-scale nuclear power based on fast neutron reactors, a closed nuclear fuel cycle will be the future.