Nuclear South West: how a private public partnership is plugging the skills gap

Hinkley Point B closed on 1st August after 46 years of service. In its time it produced 311 TWh of low-carbon electricity, enough to power every South West home for 33 years whilst saving 107 million tonnes of carbon emissions. 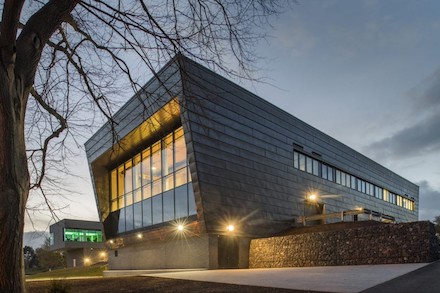 Above: The National College for Nuclear (NCfN) which was set up in 2016 specifically to develop nuclear industry skills

This happened as progress continues on the construction of the first new nuclear power station to be built in the UK for 20 years at Hinkley Point C. This is taking shape at a crucial moment for the sector. While the government has put nuclear at the heart of its energy strategy and the move towards net-zero, the industry also faces an acute skills crisis.

As home to Hinkley Point C, one of largest infrastructure projects in Europe, the South West is at the front line of this challenge. Industry, academic institutions and public bodies are working together under Nuclear South West, a private public partnership, to develop, and grow, the region’s skills and know-how to exploit the opportunities that Hinkley Point C and the nuclear sector offers.

Size of the challenge

A report by the Learning and Work Institute (L&W) in 2019 found that the UK skills shortage will cost the country £120 billion by 2030. These skills include engineers, welders, project and programme managers, scientists, and technologists.

In addition, the UK’s nuclear sector has an ageing workforce just as the sector is poised on the brink of a nuclear renaissance, with the opportunity of Small Modular Reactors, nuclear fusion, and a new wave of nuclear fission plants. Those most able to support this wave are beginning to retire.

The lack of new talent to the sector in recent years is a legacy of the 1980s, when the future of nuclear power was first called into question and the appeal of the sector began to dwindle as a career choice.

Action in the South West

Nuclear South West, supported by the Heart of the South West Local Enterprise Partnership, The South West Nuclear Hub and Business West, is taking positive action to address the skills gap, with a focus on education.

“Education, and the role that the next generation will play in the nuclear sector, is paramount to the future of this industry. Without the investment and opportunity for training, this sector needs, the future of the nuclear sector was unsettled. Whilst it has become apparent for a number of years that the nuclear industry has a skills gap, the innovative means of counteracting this in the South West are many and we are proud of the many ventures currently in place in our region.”

A key venture supported by Nuclear South West is the National College for Nuclear (NCfN). Set up in 2016 with the backing of Bridgwater & Taunton College (BTC), NCfN is specifically developing nuclear industry skills. Educational facilities that work alongside BTC to deliver the NCfN’s programmes include:

In the past four years, the NCfN at BTC has grown its curriculum, developing students who are both technically minded and embedded in sector behaviours. The aim is not only supporting the development of engineering talent, but also a broader range of skills such as welders, project managers and construction support.

Matt Tudor, Director of Commercial Development, Strategy and Partnerships at Bridgwater & and Taunton College, and Board Member of NCfN, says:

“The UK Government has committed to a Net Zero economy by 2050 and the NCfN forms a cornerstone of the skills response. Students enrolling with us are keen to be a part of the solution and the opportunities are more exciting than ever. Over one thousand students have graduated from the NCfN at BTC in the past four years, and work at various levels in many sectors of the nuclear industry.

With the much-awaited release of the Energy Security Strategy in March 2022, nuclear has moved to the heart of the UK’s net zero ambitions. Opportunity in the UK for nuclear power is supported by a growing decommissioning portfolio, and significant research and investment in Small Modular Reactors (SMRs), Advanced Modular Reactors (AMRs), and nuclear fusion.

Subject matter experts and research skills gaps are being absorbed by the South West Nuclear Hub at University of Bristol. Its role is to bring together universities and companies in the region to support research, innovation, and skills development for the nuclear industry. Other South West universities supporting this venture are the University of Plymouth, University of Southampton, and UWE Bristol.

“In the last six months we have seen major acceleration of government funded commitments to nuclear, creating real momentum around MSc and PhD training with a clear drive to industry led skills for developing new projects and research. Whilst lots of research at the University of Bristol is supporting decommissioning and fission technologies, it also includes growing areas such as our nuclear robotics programmes and fusion-related research. These are vital areas to support UK energy security. Nuclear is gaining both traction and a more positive image with the public, and inspiring a future workforce for the many roles available in the nuclear industry.”

The University of Bristol currently supports over 50 PhD research students in nuclear, with 15 to 20 new advertised positions a year. Furthermore, the MSc Nuclear Science and Engineering programme, having started with just five students in 2016, now consistently recruits around 25 students every year. Their exponential growth is testament to the action in place to tackle research gaps in the nuclear industry.

Hinkley Point C has already created thousands of jobs in the South West and beyond and is set to create 25,000 more opportunities and inject £100m a year into the regional economy. Due to open in 2027, Hinkley Point C marks only the beginning of a significant programme of investment in nuclear power right across the UK – the South West’s pipeline includes 15 projects worth £50 billion over the next two decades. It is only by taking positive action now to plug the skills gap that the South West, and the UK, will be able to fully realise these opportunities this investment brings to the next generation.

Advanced Engineering Centre at Bridgwater College
Student visit to Assystem, an independent engineering group based in Paris
The Somerset Energy Innovation Centre in Bridgwater which has created a hub for renewable and nuclear power in the South West
Over one thousand students have graduated from the NCfN at BTC in the past four years, and work at various levels in many sectors of the nuclear industry
Welding Centre of Excellence at Bridgwater & Taunton College
Post to: