Unlocking the potential of robotics in nuclear

Christian Pilon, Head of Robotics - Nuclear at SNC Lavalin, explores the opportunities for integration of robots with remote-control and digital twin technologies in the nuclear industry. 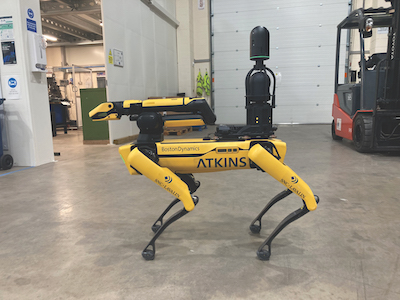 Above: Spot is a quadrupedal robot that can be used for characterisation

THERE IS A WELL-KNOWN saying in robotics and automation that if a task is ‘dirty, dull or dangerous’ then it should be automated. ‘Difficult’ and ‘dear’ are sometimes added to the list. There are plenty of tasks that fall into one of these five categories in the nuclear industry, yet robots are still used relatively rarely.

Nuclear sites are amongst the most challenging environments for robots, with high radiation levels, limited access and lack of automation infrastructure. All these operational risks are precisely why robots should be used — to minimise risk to humans. However, technology used on nuclear sites must be at a high readiness and robustness level and this requirement often prohibits experiments in adopting emerging technology.

How can we overcome these barriers to unlock the potential of robotics for nuclear?

Drawing inspiration from other sectors

In other industries, such as automotive, electronics and packaging, robots are not emerging technology. Robots typically excel at repetitive tasks in well-structured environments, such as a production line in a car factory. When the environment is predictable, for tasks such as material handling or machine tending, the robot requires limited intelligence to do its job and, when the production volumes are high, there is generally a good business case for automation and robotics.

As production costs in other industries have increased and robot prices have decreased and, other industries have also looked to robots to solve their challenges. Aerospace is a good example. Compared to the automotive industry, production volumes are relatively low and the complexity of the manufacturing processes is high, but there are still plenty of applications where automation makes sense. That may be from for safety (avoiding repetitive operations); quality (sometimes manual processes cannot meet precision and tolerance requirements) or cost efficiencies. Agriculture is another example of a challenging, less structured environment where robots are making an entry. Picking fruits would not have been considered an achievable application ten years ago.

The challenges of the nuclear industry for robot implementation may be unique, but the solutions and technologies do not have to be, which is why it makes sense to consider how other industries are embracing robotics.

Supporting the deployment of robotics in nuclear

For robots to operate in challenging conditions, their technologies have improve perception and ability to interact with the environment. While the standard approach in robotics has always been to change a process to simplify automation — adapting the environment to the robot — this is not always practical in the nuclear industry. It is increasingly important to have robots that can adapt to the world, not the other way around.

A common example of how robots can perceive their environment is the use of cameras and machine vision. In recent years, the lower cost of cameras and algorithms that combine machine learning with greater processing power have resulted in new capabilities that could benefit nuclear. In e-commerce fulfilment centres, some robots now use low-cost 3D vision sensors and AI to prepare orders for consumer products. This ability to identify and select objects of different shapes and appearances could be applied to nuclear waste segregation, if the technology can be adapted to such challenging environments.

Progress is also being made in force control, providing the robot with a sense of touch. Mechanical innovations can also help, such as adaptive robot grippers that can grasp objects that vary in shape and size, without having to rely on sophisticated sensors and software.

Advances in human-robot collaboration will facilitate the deployment of robots in the future, particularly as we use robotics to reduce risk and enhance workforce safety.

Collaborative robots, for instance, are a type of robot intended to be deployed safely around people, with features such as collision detection and force limitation. A complete safety risk assessment is always required before deploying any robot but, in the right conditions, these robots can operate alongside operators without safety fencing. On a nuclear site, that could translate to robots conducting inspections and measurements without disrupting people on site conducting normal operations.

Collaborative robots typically sacrifice speed and payload, when compared to traditional industrial robots, but may have features that enable intuitive operation and programming. Safety devices can also be paired to robots to allow easier collaboration or cooperation between humans and robots. For example, safety scanners can be programmed to limit the speed of a robot when someone enters a warning zone and stop it if someone enters a danger zone.

Translating these technologies into practical applications is a useful way to see how robots can improve safety and productivity in different ways.

The following are examples of how our robotics team is exploring multiple applications.

Data collection is increasingly important for nuclear sites, both for safe operation and to inform applications, from performance monitoring to predictive maintenance and the development of digital twins. These data include radiological measurements, image acquisition and 3D scans, tasks that robots could do instead of humans.

There are two main benefits to this. First it reduces risk, as it avoids sending people into hazardous areas. If data needs to be collected in an uncharacterised environment, it is far safer to send a robot in first to assess risks and plan further activities properly. Second, even in characterised environments, routine surveys still have to be conducted.

In that case, robots can help get data at pre-programmed times and locations, so people can focus on what to do with the data, boosting productivity as well as safety.

A great example is Spot, from Boston Dynamics. Spot is a quadrupedal robot that can be used as a platform to deploy instruments such as cameras, 3D scanners and gamma monitors. It can navigate through unstructured environments, over obstacles and up or down stairs, and it is equipped with an arm to open doors and pick up or drag objects, enabling remote data collection across different sites and challenging environments.

Operating a robot remotely may be the best solution for situations where full automation is not possible. Robots can augment people, so work can be done safely and more efficiently.

In the UK, we are removing hands from glovebox operations by developing a remote-controlled robotic system. Robot arms can be deployed through the existing ports of the gloveboxes (where the minimum inner diameter of the port is 150mm), keeping people away from harm. For this application, the Kinova Gen3 collaborative arm is equipped with tools such as grippers, angle grinders, screw drivers and plasma cutters to perform the glovebox tasks effectively, and can be programmed to avoid interferences with the glovebox and its content.

Selecting and installing a robot is only a small part of solving the problem. Operating a robot remotely requires a combination of intuitive user interface, sophisticated robot control, low-latency communication and sensors, to provide the operator with all the required information such as cameras, scanners and haptic feedback. In this instance, tools and technologies can be leveraged such as gaming engines for visualisation and user interface, the robot operating system (ROS) in our software back-end, 3D cameras to capture the robot’s environment and virtual reality (VR) to develop an immersive and intuitive user experience.

Developing these kinds of solutions creates a replicable approach that can be adapted to other applications. The focus here is adapting existing robots and established technology to create new, nuclear-specific functionality faster and more efficiently than researching and developing new robotics for the sector.

There are also applications where we can take standard industrial robots and design automated process around them, such as handling alpha-contaminated gloveboxes or managing decommissioned waste. In the latter we can sort waste according to its radioactivity level to optimise storage and generate cost savings, using an industrial robot with a sophisticated vision system and software and pairing it with standard characterisation instruments.

Accelerating the journey towards robotics

To truly realise the potential of robotics and create robust solutions, we must avoid re-inventing the wheel and working in isolation. We need to maximise the lessons learned from technologies that have been developed by other industries and adapt them to solve nuclear-specific challenges.

We act as a systems integrator, partnering with manufacturers and suppliers from the robotics industries to identify opportunities to adapt and enhance existing technology to meet nuclear’s specific requirements. This kind of collaboration bridges the gap between academia and the industry: it feeds-in those specific requirements, enables experimentation and focuses research and development efforts on those areas or use-cases where new technologies are required.

The nuclear industry is a challenging environment to implement robots, but it has a high potential opportunities and rewards. Unlocking those benefits can truly transform our sector.

Want to learn more about the potential for robots and AI in nuclear decommissioning?

Register to join us on 17th May for Nuclear Decommissioning: International perspectives virtual event to hear about some of the latest innovations being used in nuclear decommissioning projects around the globe. Sam Stephens, global head of digital: nuclear and power at SNC-Lavalin and Darren Grears, EMEA digital director: nuclear and power at Atkins – a member of the SNC-Lavalin Group, will be both be speaking at this event.

Their presentation will discuss the latest technologies that are transforming decommissioning planning, drawing on examples from SNC-Lavalin’s international activities with nuclear plant operators around the world to show where these approaches have added value to projects, and sharing their view of what to expect from the next disruptive innovations to support this new way of working.