Why interpretation of regulatory requirements should be harmonised

It is vital that national regulators and reactor vendors learn the lessons of the national approach to regulation of Gen III reactor designs and apply them to the review of emerging technologies, such as SMRs, to facilitate a wider deployment of standard designs, and support deeper decarbonisation of our energy systems. By Allan Carson, Byung-Chan Na and Claude Mayoral on behalf of the Licensing & Permitting task Force, CORDEL, World Nuclear Association 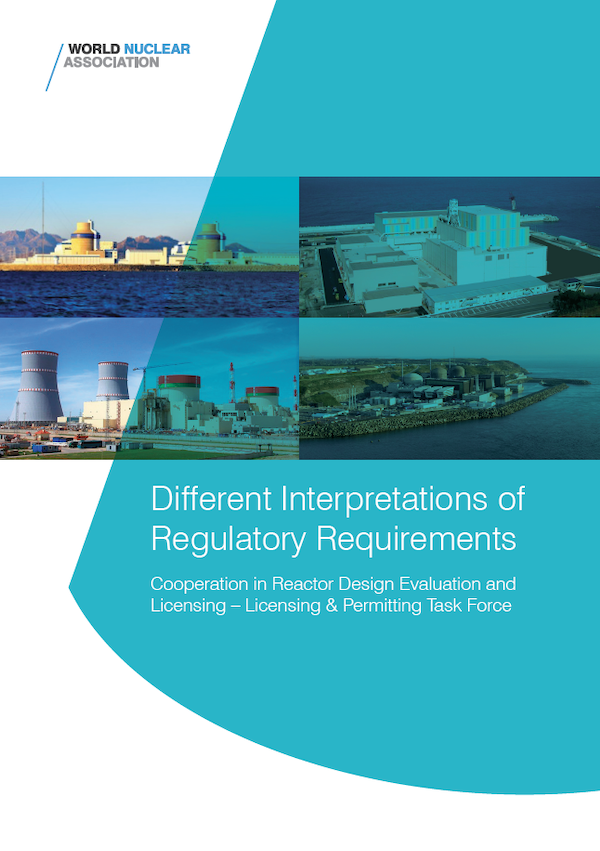 A neutron in North America is the same as a neutron in Europe. But while the physics does not change, national regulators’ interpretation of the risks, and how best to manage them, vary widely. This limits the wide deployment of standardised reactor designs.

High-level safety and regulatory requirements have been implemented and agreed through consensus at international level through the Convention of Nuclear Safety and the International Atomic Energy Agency’s (IAEA) safety standards. So why is it that we continue to build different versions of the same reactor design in different countries?

In most cases national regulatory requirements were developed using national experience and implemented to support national programmes. During this time little thought was put into aligning approaches between different countries.

Various international activities through organisations such as the IAEA, Western European Nuclear Regulators’ Association (WENRA), NEA Multinational Design Evaluation programme (MDEP), and World Nuclear Association’s Cooperation in Reactor Design Evaluation and Licensing (CORDEL) working group, have attempted to further harmonise the application and interpretation of these high-level standards into specific national regulatory standards and guidance. These efforts have not gone far enough, and there is still significant variance between reactor designs deployed in different countries.

This variability can be best demonstrated by looking at the past opportunity for large fleets of Gen III nuclear power plants operating around the world and considering why the design has changed where the same reactor design has been built or licensed in multiple countries.

The CORDEL report ‘Different Interpretations of Regulatory Requirements’ examines this in detail, providing examples of when the national regulatory licensing approach has altered the designs of the Westinghouse AP1000, Hitachi-GE ABWR, EDF/Framatome EPR and Rosatom VVER-1200.

The differences in national regulatory approaches and the subsequent design changes required to be implemented has resulted in what should be Nth-of-a-kind (NOAK) projects reverting to first-of-a-kind (FOAK). By incurring many of the project and licensing risks and costs associated with such projects, from the project outset there is a great deal of uncertainty regarding the licensing duration and output.

The CORDEL report discusses a wide variety of safety requirements, such as defence-in-depth to heating, ventilation and air conditioning (HVAC) design, and how their implementation varies between national regulations and guidance. The review found that differences in the outcome of design solutions are often driven by differences between the way in which national regulators identify fault scenarios or conditions and acceptance criteria, which ultimately define the design provisions.

The differences between the acceptance criteria can be difficult to distinguish. They are not always part of the established requirements, but in some cases may be strongly influenced by the differing interpretations of national experts.

The report also found that the method of demonstrating a safety case varies widely between national regulators (eg, prescriptive vs non-prescriptive). When reactor vendors wish to license their design in a country with a different regulatory framework, the different levels of prescriptiveness in regulations and guidance can lead to a complete re-framing of the original safety case and a significant effort from the reactor vendor to produce new documentation that was not required in other countries.

It might be expected that more prescriptive regulatory frameworks are less flexible and would result in many potential design changes through the licensing process; however this is not necessarily the case. Just because a regulatory regime is less prescriptive in nature, it does not mean that significant design changes will not be required to fulfil national regulatory requirements.

What does this mean for new reactors designs proposed to come to market in the next decade? If we do nothing and national regulatory approaches continue to drive significant design changes — resetting developers to FOAK projects in each new country — many designs will never reach the market or will struggle to expand beyond their country-of-origin regulatory framework and supply chain.

It is vital that national regulators and reactor vendors learn the lessons of the national approach to regulation of Gen III reactor designs and apply them to the review of emerging technologies, such as SMRs, to facilitate a wider deployment of standard designs, and support deeper decarbonisation of our energy systems.

The CORDEL report makes several recommendations for reactor vendors, licensees, and national regulators to be more cooperative and expand upon both the specific safety requirements identified within the report and the key lessons to develop a streamlined approach to regulation, utilising risk informed decision making where possible.

This would require extensive collaboration between governments, national regulators and industry.

To facilitate this collaboration, the report points to another CORDEL report, ‘Harmonization of reactor design and licensing: lesson learned from transport’ which recommends the formation of a multi-national advisory panel, whose aim would be to facilitate just such collaboration among national regulators.

However, this cannot be done by national regulators alone. Governments must provide the policy and financial support to allow regulators to undertake this collaboration, and industry must collectively support regulators’ efforts to harmonise industrial codes and standards and to develop industry positions on key safety requirements.

Note that this is not a proposal to challenge national regulatory sovereignty or reduce the required level of safety standards. In fact, through appropriate collaboration, both of these can be maintained and even enhanced.

There is a lot of work to be done if this is to become a reality and it will not be easy, but without streamlining approaches to regulation, the ability of emerging designs to achieve NOAK costs would be limited, and there may only be a small number of countries with sufficient capacity to build the requisite number of plants.