This week, WNE2021 will see the nuclear industry meeting in a new world, with new opportunities post COP26. Are we about to see a change in the conversation around nuclear?

A longstanding provider of low-carbon power; a key player in meeting growing low-carbon electricity needs; a major industry and an export opportunity; and an enabler of new energy vectors. Those were among the descriptions of nuclear that emerged over recent months as the industry geared up for a welcome meeting ‘in real life’ at WNE 2021 in Paris.

The meeting’s timing immediately after the Conference of the Parties (COP26) gives industry members an opportunity to discuss how nuclear can help meet global commitments and take action in response to climate change and this will be a key theme of the conference.

As the COP26 climate conference opened in Glasgow, the UK’s Nuclear Industry Association (NIA) was there with a reminder of what nuclear could deliver. It highlighted a “significant milestone” for the host country’s nuclear fleet, which had clocked up 2000TWh of clean power generation.

Over its 45 year history nuclear had saved the UK more than 2.3 billion tonnes of carbon emissions, the group said. It also highlighted nuclear’s highly efficient use of land, saying that the UK’s seven operational nuclear power stations have a combined land footprint of less than 1 square mile.

Nuclear feared it would be under-valued at COP, as discussions continue over where it will stand in ‘green taxonomies’ of sustainable electricity. That question remains moot, but the conference did perhaps shift the discussions as, for example, when major climate scientists such as James Hansen, Ken Caldeira, and Kerry Emanuel joined others to lend their weight to Generation Atomic’s campaign to persuade the Sierra Club to end its opposition to nuclear power. In an open letter, Generation Atomic said “universal opposition to nuclear power is no longer tenable in the 21st century, given the staggeringly difficult challenge of rapid and permanent decarbonization.”

In WNE2021’s host country, France, President Emmanuel Macron has now set his face against proposals that have gained ground in recent years to scale back its use of nuclear. Instead, in a major speech looking forward to France 2030, he highlighted nuclear’s role as a key electricity supplier, promising a decision on up to six new units in coming weeks.

He said ‘reinventing nuclear power’ was the first objective in the plan, with investment of a billion euros to demonstrate small nuclear reactors. He said this programme would be “starting very quickly with very clear first projects.”

Equally for France, nuclear’s industrial and export potential was central to its investment, with Macron suggesting that French-supplied EPRs could form the backbone of an invigorated Polish power sector beyond coal. France is far from the only country to offer nuclear technology, as a walk around the WNE2021 exhibition will show.

As for nuclear’s role in enabling clean, new energy vectors, Macron is not alone in considering whether hydrogen will replace liquid fuels for road transport. US President Joe Biden is eyeing the same opportunity, and in October the US Department of Energy announced that it would spend $20 million on research into the production of clean hydrogen from nuclear power. That investment will help pay for a demonstration project by PNW Hydrogen at the Palo Verde nuclear plant in Arizona.

Although the new-build opportunity is of key importance to the world, the nuclear industry has its other task of maintaining and improving performance at existing reactors and – another major theme of the meeting – minimising and managing the industry’s waste. For the industry, a nuclear site remains of importance after plants have closed, both as a potential site for follow-on units and as a focus for decommissioning and remediation work – an area where immense strides have been taken since early nuclear units were shut down. Lessons have been learned and technologies and techniques developed to manage end-of-life that can reduce the life-cycle costs of nuclear. And in a ‘virtuous circle’, that has fed back into the design and operation of new plants to make them fit for a longer service life and more economical post-closure management.

What do you want to talk about?

The nuclear industry is able to meet face to face at WNE, as well as digitally, and with the organisers expecting up to 18,000 participants – what will be the new conversations that are struck up?

At Nuclear Engineering International we are looking forward to the opportunity to talk with industry members taking nuclear forward in the Post COP26 and Post Covid world. If you are attending the event in person, please visit us on stand #M39.

The global opportunity is crystalised at WNE2021 in the enthusiasm countries have shown in inviting the global industry to meet their industries in person, after two years when most contact has necessarily been by remote means.

Along with exhibitors from hundreds of nuclear organisations, the show’s national pavilions give delegates an opportunity to talk face to face with colleagues. In our event preview we have used those pavilions as a focus to remind delegates of the nuclear history and ambitions of each country. We’ve invited some comment from organisations who will be at the show and from the major sponsors.

It has been particularly positive to see the investment in nuclear signalled by pavilions from countries that have relatively little current nuclear generation – or even none at all.

That signals a wish to expand an existing industry, as in the representatives from Slovenia and Romania. In the case of Wales, it shows a wish to retain the nuclear option in a region that has benefitted from the investment in industry and people that came along with past nuclear plants. In Poland, it signals a fundamental shift in priorities that will eventually see expertise and major industrial investment shift from the coal to the nuclear sector. All the pavilion organisers invite delegates to ‘come and talk’ in the live exhibition.

The WNE organisers have identified several important strands of discussion, on the opportunity for nuclear in meeting low-carbon objectives and progress on small modular reactors (SMRs), both of which we discuss in detail elsewhere in our special issue. Decommissioning and waste management are also high on the agenda, no surprise with a phaseout looming in Germany. But equally, the exhibition runs hard on the heels of life extension applications in the USA, illustrating that in some countries the value of existing nuclear has been firmly accepted. 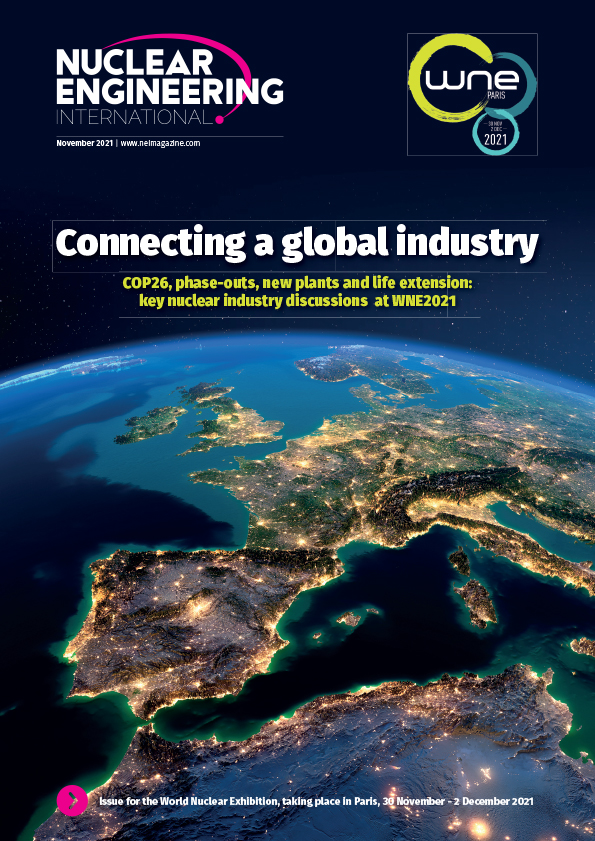 - Previews of the country pavilions

- Insight from some of the event's main exhibitors