In the wake of the conflict in Ukraine, concerns over Russia’s major role in the nuclear fuel supply chain have been brought to the fore as the industry seeks to assess potential risks and if alternatives are necessary. At an international event in London, the industry gathered to explore the situation. 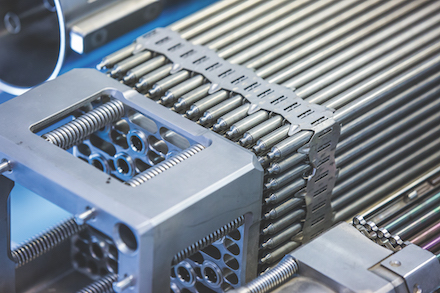 Above: Conflict has increased the risk associated with nuclear fuel availability

A shifting geopolitical and economic situation has prompted a significant reappraisal of security of energy supply and with it the long-term future of the nuclear fuel cycle. Alongside its significant oil and gas reserves, Russia has played a major role in the global supply of uranium and refined uranium products for civil nuclear facilities. Now that supply route is at risk of potential sanctions, the industry is looking at the feasibility of ramping up alternative sources of uranium ore, changing transportation routes and the possible substitution of Russian enrichment and reprocessing capacity.

The opening session heard from Kazatomprom’s Chief Commercial Officer Askar Batyrbayev, Orano’s CEO Nicolas Maes and Cameco’s President and CEO Tim Gitzel in a panel discussion that explored uranium mining. The conference heard that while there were no obvious immediate concerns regarding uranium supply, in the longer term it is clear that market risks are being amplified by the situation in Ukraine.

Maes downplayed the fundamental market risks, arguing that from the supply and demand perspective nothing has significantly changed: “Consumption by reactors hasn’t changed, and it’s not because the financial community came and played on our market. We obviously have in mind what is happening at the moment in Ukraine, but geopolitics have been there in our market on a much larger scale and have been for a while.”

He suggested that it is unlikely that sanctions will be imposed on nuclear materials because it is a relatively small market when compared to fossil fuels, given the global uranium market is worth around US$9bn annually. This is equivalent to just “a few days of sales for the top oil companies,” he said.

Batyrbayev echoed Maes, noting that Rosatom has not seen any sanctions imposed, “There have been no disruptions in operations. We have five joint ventures with the Rosatom group. All of them are operating normally,” he noted.

Nonetheless, the heightened geopolitical tensions follow years of inventory run-down and production cuts in the face of a slump in uranium prices. Gitzel noted that Cameco had mothballed a number of its production sites in the wake of Fukushima Daiichi, for instance, but said of the latest developments: “This year has changed everything. The last 60 days have been unbelievable. We are still trying to figure it out.”

Batyrbayev also pointed to the growing risk of uncertainty in the uranium market, saying it is hard to predict where the market will go and what sort of restrictions may be introduced. In response, Kazatomprom is looking at alternative transport routes that avoid passing through Russian territory, with transport perceived as one of the biggest risks: “We started to develop alternative routes that do not use Russia at all,” he said. Kazatomprom is apparently looking at a route through the Caspian, Black and Mediterranean Seas as well as another route through China, although costs are expected to be higher than the established Russian transit route.

Market fundamentals and long-term security are clearly key to establishing alternatives to the existing supply chain though. For instance, Gitzel noted that Cameco is ramping up production at the McArthur River/ Key Lake site over the coming 18 months to two years while other sites in Nebraska and Wyoming could be brought on-line if sufficient demand was available. “We operate on supply-demand fundamentals. We want good utility customers that will stick with us for five to ten years... so that we can confidently invest in our operations and run them,” he said.

The morning concluded with a session exploring government and utility views on energy and supply security, hearing from Yves Desbazeille, Director General, Foratom, Adrienne Hanly, Uranium Production Specialist in the Department of Nuclear Energy at the IAEA and Jason Murphy, Vice President of Nuclear Fuels at the US utility group Constellation.

This session included preliminary analysis from a forthcoming IAEA report looking at uranium inventories. Hanly said that data from the Euratom Supply Agency (ESA) and the US Energy Information Administration shows that 42,400 tonnes of uranium equivalent was held by European utilities in 2020 and about half that amount was held in the USA. European declared inventory equates to ESA’s recommended two-years’ worth of supply, but many individual utilities fall short of this benchmark, Hanly said. In the US this figure is about 16 months of supply.

“A preliminary conclusion is that US utilities may have limited capability to independently manage a protracted supply disruption,” she added. Hanly also called for more transparency in inventory reporting and additional diversity in supplies. The IAEA report is due in early to mid-2023.

Despite any potential increase in uranium supply risk there was also a broad call to embrace nuclear power as a route to security of energy supply, especially given it is much more stable when compared with other more volatile energy resources from Russia such as gas.

Desbazeille said that policymakers should look at extending the operating life of the existing nuclear fleet, for example, reflecting the changing perspective of people, and describing it as a cheap and available alternative to gas. “In some countries, we see that public opinion tends to shift to a more positive view on nuclear and the role it can play,” he said. However, this is very much a decision that would be based on the in-country perspective, he noted, contrasting the situation in Germany with that of Belgium. “In Belgium,” he said: “73% of citizens are now supportive of the idea of prolonging the whole fleet”. In Germany, however, while it would technically be feasible to extend the operating lives of the existing reactor fleet, there is very strong political opposition.

Constellation’s Murphy touched on the utility perspective noting that key risks are from the operational side, including factors like ensuring a reliable fuel supply stream, and risks from the financial side like market prices. Managing operational risks can include strategies like diversifying the supply chain both geographically and among supplier companies, as well as increasing inventory to weather any potential supply chain disruptions. He said that while US utilities have historically maintained lower inventory levels than their European or Asian counterparts that may change in light of the changing perspectives on supply chain risk. However, he also counselled caution: “As an end user, you have to take long view and try to resist the – very human – urge to take immediate action. Sometimes, doing nothing is a strategy,” he observed, adding that decisions should not be taken in the moment but rather made “calmly and rationally”.

The conclusion of the conference considered the role of financing in uranium markets, featuring Richard Allan, Managing director and COO of Bacchus Capital Advisors, Per Jander, Director of Nuclear and Renewables at WMC Energy, and Scott Melbye, CEO, President and Director at Uranium Royalty Corp.

Brandon Munro, Chief Executive Officer and Managing Director of Bannerman Energy and chairing the session, pointed to the impact of financial players and investors entering the uranium market. Indeed, Allan noted what he saw as the fundamental miss-pricing of uranium at $18-21/ lb in 2018 as part of the impetus to set up the Yellow Cake company which buys and stores uranium – and gives commodity traders an opportunity to participate in the uranium market. “This does attract capital and increases the efficiency of the allocation of capital through increased transparency and education,” said Allan.

Melbye also highlighted the role of non-traditional uranium buyers such as royalty investors. “It provides a diversified investment that allows them to be involved in the uranium story,” he said. “This is an industry that has been dialling back production and discouraging production in an over-supplied market over the 10-year bear market that we have gone through,” he said. But he also noted: “We’ve gone through all the highs and lows over the years but I think we are in the most exciting phase of the nuclear energy industry’s history in these years ahead of us”.

Why invest in uranium? “This is an awfully attractive asset on the balance sheet, acquiring uranium near the cycle lows,” Melbye said.

The World Nuclear Fuel Conference, co-organised by the Nuclear Energy Institute and World Nuclear Association, was being held in-person for the first time since 2019.

Uranium mining production and inventory has been run down over recent years
Yellow cake is now attracting commodity investors to the market
Post to: